The Lord has cared for mankind since the beginning of creation.

He created man in his own image and placed him in a beautiful garden called Eden.He then saw that the man needed company and help,hence he made a woman for him.He   then told them to be fruitful ,to  fill  and dominate the earth. 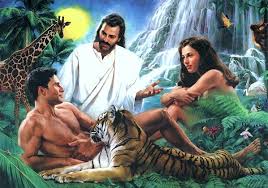 The Lord conducted the first marriage ceremony.He instructed the newly wed couple to fill the earth.He expected them to bear children.God made us sexual beings for his own purposes;to fill the earth!He knew that our sexual lives mattered.

We can see that God expects us to have sex only within marriage.

When we have sex outside of marriage,it does not please God.

While studying Deuteronomy,we come across various laws which Moses gave to the people concerning their sexual lives.

We need to realize that though the laws are old,they refer to the same act,and the lawgiver has not changed.God wants our sexual lives to have high standards.He was,He is and He will be.He is the same yesterday,today and forever.

Before the arrival of Jesus,people faced these judgments,but when Jesus came,we are expected to realize our sins,repent and turn away from the wrong ways.

Jesus came to fulfill the law,and one of the things he made clear is divorce.His words from the passages below indicate that God hates divorce,and if it happens,one should stay single for the rest of their lives as long as their former partner is alive,even if the reason for divorce is sexual immorality,when you decide to divorce,you are required to stay single.You only remarry,when your former partner dies.

2 The Pharisees came and asked Him, “Is it lawful for a man to divorce his wife?” testing Him.

3 And He answered and said to them, “What did Moses command you?”

4 They said, “Moses permitted a man to write a certificate of divorce, and to dismiss her.”

5 And Jesus answered and said to them, “Because of the hardness of your heart he wrote you this precept. 6 But from the beginning of the creation, God ‘made them male and female.’[a] 7 ‘For this reason a man shall leave his father and mother and be joined to his wife, 8 and the two shall become one flesh’; [b] so then they are no longer two, but one flesh. 9 Therefore what God has joined together, let not man separate.”

When we refuse to engage in sinful sex,its an act of worship.

Romans 12:1    I beseech you therefore, brethren, by the mercies of God, that you present your bodies a living sacrifice, holy, acceptable to God, which is your reasonable service.

When we refuse to engage in sinful sex,we glorify God.Since Jesus Christ sacrificed his life for you and me,one of the best ways to appreciate what he did is by living pure,holy lives.Paul  tells us to run away from sexual immorality.When you see a hint of it,take off.

1 Corinthians 6:18-2018 Flee sexual immorality. Every sin that a man does is outside the body, but he who commits sexual immorality sins against his own body. 19 Or do you not know that your body is the temple of the Holy Spirit who is in you, whom you have from God, and you are not your own? 20 For you were bought at a price; therefore glorify God in your body[a] and in your spirit, which are God’s.

What do you think happens when someone sins sexually,and they know it but ignore to correct their ways?

The fact is that though we may ignore our sins,the Lord will not ignore them.

If we do not repent and change our ways,we will face judgment.

May the Lord richly bless you,

2 thoughts on “OUR SEXUAL LIVES MATTER”